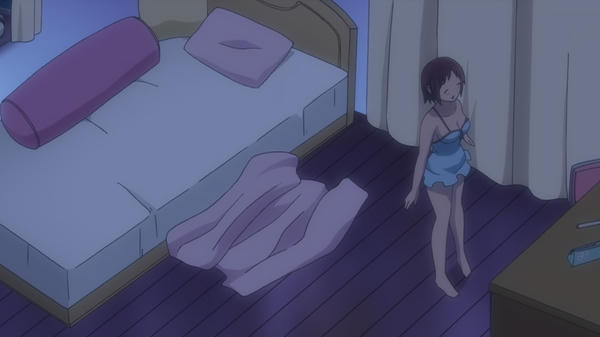 You might be asking, why would we encode this meme-tier anime? Who would want to watch a pepega girl sleeping for 45 minutes? Well, I will let the top review of this anime from MyAnimeList explain:

In this anime, you get to watch a overly-enthusiastic school girl sleep with you while acting like a 5-year-old. Making nasily "ehee" noises with this face: =^_^=.

Thus begins a 50-minute mystery journey that ends with a stunning revelation: Issho ni Sleeping: Sleeping with Hinako is a prequel to Bleach, and a sequel to the movie Inception.

First of all, you can, and DO, teleport. Very often. Maybe you're a camera wearing a human disguise, maybe you're a wizard! Who wouldn't want to sleep with a wizard!? Maybe that's why she thinks she's five, you put a spell on her, you dirty old man, you!

This then goes into random dreams while she shows just how unhealthy her sleeping is by waking up every five minutes. Then she gets 3AM-horny and wants to kiss you, proceeds to ignore "you" for a body pillow, and then later gets a midnight snack thinking you are a ghost. Why would she "think" you're a ghost, unless...you are a ghost, and she doesn't want you to know that you're dead.

Really, if you think about it, that would explain everything. Why you don't have a physical body. Why you are in her bedroom despite her most certainly having parents that would object to a boy sleeping with her. Why only she can see you. Why you frightened her in the kitchen. Why you don't wake up at the alarm clock. Why you are able to teleport. Why she giggles every time she looks at you, and why when she's "kissing" you, the camera shows her kissing at nothing.

You are a god damned ghost. You're dead. And haunting her. She's your sister. She is happy to see you because she misses you. Give her a couple more years and she will run into a Shinigami and become a Faux Shinigami, you'll run away, and you will join them as an arrancar 100 episodes later. YOU are the final boss. YOU will end up killing the original Shinigami (her actual older sister) while the girl grows up to become Rukia Kuchiki, and Byakuya pretends to be her brother. Hinako IS Rukia Kuchiki. Issho ni Sleeping: Sleeping with Hinako is a prequel to Bleach, and it's possible that you get re-incarnated as Ichigo later on.

And then it turns into inception with not one, but TWO false awakenings.

It's a sequel to Inception, a prequel to Bleach, and the single greatest anime in existence. Ghost in the shell's got nothing on this...or DOES IT?